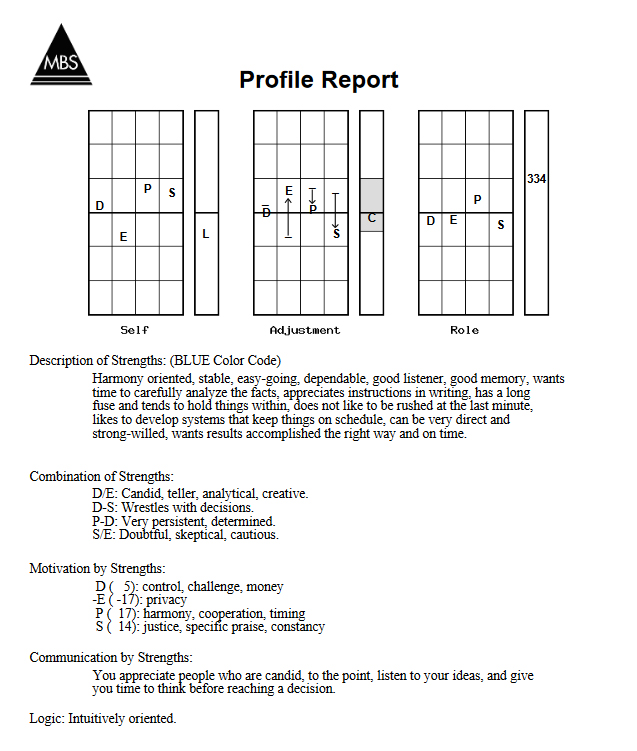 The Self Profile on the MBS Profile Report is a graphical summary of a person’s basic communication style … their temperament.

As we interact with a person, it is important that we make the effort to consider their “Point of View”. If we can work with each individual based on how they need to be worked with, we are then able to accomplish our own goals. Effective working relationships result in improved communication, increased productivity and improved customer & job satisfaction.Understanding a person’s Self Profile … their “Style” … their “Point of View” … their temperament … is our key to developing an effective relationship.

Though our Self Profile remains constant, we are able to adjust our temperament depending on a given situation in order to accomplish our goals.

If at work you need to interact with other people, your Adjustment Profile may show that your E Trait, Extroversion, was going up. If the E is moving up the column (an up arrow) then you were having to be more outgoing and talkative. If on the other hand the E is moving down the column (a down arrow) then you were having to get off by yourself and be less talkative (as in the example).

Likewise, a D moving up the column in the Adjustment Profile (as in the example) indicates that you were having to be more Direct … you were taking charge, making decisions, focusing more on results. Directness moving down the column means that you were perhaps less in control, having to delegate more, taking a non-threatening style.

S moving up in the Adjustment Profile indicates that you were making Structured adjustments, paying more attention to the details, working more by the book, being more careful, crossing the T’s and dotting the I’s. If the S is moving down the column (as in the example) then you were more flexible, paying less attention to details.

Traits that appear in the Adjustment Profile in approximately the same position as they are in the Self Profile indicate that there was not any noticeable change in how you were using that trait. You were using that particular trait in your natural way … without adjusting.

Our Self Profile remains constant.

We are able to adjust our temperament depending on a given situation … that’s the Adjustment Profile.

How people see us as we are making those adjustments is shown in the Role Profile. The Self + The Adjustments = The Role

Looking at the Self Profile, this person is naturally Direct (+D), Private (-E), Paced (+P) and Structured (+S). The Role that people were seeing though was Non-Threatening (D below the line) and much more Flexible (S below the line).

Depending on the situation, this person may play a very different role. We need to work with people based on their temperament (the Self) and not on whatever Role they happen to be playing at the moment to accomplish their goals. Remember … the Role is just what you see … the Self is who they really are!

In the column to the right of the Self Profile is the Logic indicator.

At the point of making a decision, a person either leans mostly on the “facts” of the situation (L above the line) or they rely more on how they “feel” about the situation … their intuition (L below the line). In our example, the L falls below the center line so we would say that at the point of decision, this person will rely on their intuition, or what they feel will be the correct decision.

Whether the Logic indicator is above or below the line is neither good nor bad. It simply indicates whether a person uses a fact-based or feeling-based method of decision making.

In the column to the right of the Adjustment Profile is the Concern indicator.

C can stand for either Comfortable, Concerned or Self Critical depending on where in the column the C is located.

As the C moves DOWN the column, outside the Comfort Zone, we say that 4-8 weeks ago when the person was making these specific adjustments, they were concerned whether or not they would accomplish their goals. The further down the column the C is, the more concern there was.

On the other hand, as the C moves UP the column, outside the Comfort Zone, we say that when the person was making these adjustments they were being hard on themselves … Self Critical. The further up the column the C is, the more Self Critical they were.

Even though the C may indicate that a person was being VERY hard on themselves (C high in the column) or that they had LOTS of concern (C low in the column) … things may have turned out fine. As a matter of fact, the person may be experiencing a similar situation, making similar adjustments, but their C may be right in the middle of the Comfort Zone.The C Level is a snapshot of how the person felt as they were making specific adjustments to accomplish their goals. They were either Self Critical, Concerned or Comfortable.

In the column to the right of the Role Profile is the Energy Level. An average energy is 250.

The Energy Level measures the total intensity of a person’s responses to the word descriptors on the MBS Survey.

Most people have plenty of “energy”. We’re sure of this because we rarely see people carried from work asleep. And while it is true that some people naturally have more energy than others, how they use that energy and whether or not that energy is available to them when they need it are important considerations. The energy that a person has is more available when he/she is comfortable.